To fulfill COP15 we must Unite Nations In Poor Cold Caves

Let me start by saying, I have invented no ideas of my own, I borrow here and there and get a full draft picture emerging in the end. The various media have made it almost impossible to get even the simplest of physics and maths put together, it looks like many of natures elements exist here on Earth in order to satisfy IPCC and the rest of climate confusers.

IPCC has tangled the whole climate issue into a Gordian Knot to a degree where dictionary get screwed-up, like for the word “greenhouse-gasses”.  Everywhere I looked-up that word, I was told: “greenhouse-gasses cause global warming and the main greenhouse-gas is CO2.” - Not bothering to mention H2O despite this stuff dictates 95% of the greenhouse-effect. They also forget to tell that greenhouse-gasses like H2O can have both a cooling and a warming effect.

I love Lord C. Monckton for his lordships way of simplifying the climate confusion and he does it in an entertaining way.  I will pull a segment from one of his many speeches, the segment that inspired the title: “Unite Nations In Poor Cold Caves”. 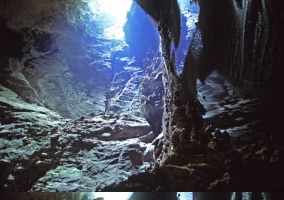 The UN’s idea of where much of the civilization will have to live to “save the planet”.

In order to reduce an IPCC expected rise of 6°F or 3.3°C over the next 90 years with 1°F or 0.6°C, we need all human activity on the whole planet to come to an absolut halt for 33 years without the right to light a fire, only to drive Flintstone-mobiles and without Internet and electric light. - Not even nuclear electricity, it would have to be a genuine zero-CO2-emitting world society.
It is a very simple calculation based on IPCC figures, you don't even need your solar powered calculator:

If we want to get rid of all 6°F the IPCC predict before year 2100, then we can't even do it by inhibiting all human activity on Earth, because removing all 6°F warming will take 200 years where no one, not even Al Gore, is allowed to cook a meal in his cave.

It is therefore hilarious how the COP15 Treaty (FCCC/AWGLCA/2009/INF.2) is to decide various quota of CO2 to pay tax for, depending on your country's level of westernization. As illustrated above, there is no possible way, even with IPCC's grossly improved performance attributed to CO2, we realistically can influence the global temperature by means of reducing our CO2 contribution to the plants.

If the UN intend to help the poor, develop the under-developed countries and so on, they do a very illogic deal at the moment; they should explain themselves in far better/honest ways than playing games with science. The question is if UN's punishing way of distributing wealth wouldn't in fact lower the global middle class wealth.  Could it be, that simply just helping countries in need, instead of transferring CO2 penalty money from “rich” to “poor”, would better the Western economy and at the same time get the wheels spinning in the less developed countries?