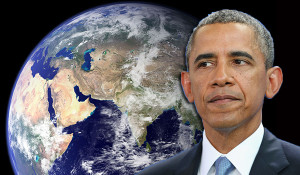 On Friday, Obama signed an executive order that instructs federal agencies to work with state and local governments to boost preparations for the impact of global warming. Obama's war on coal has threatened one sixth of America's electrical output by placing 150 coal-burning power plants on the chopping block – all due to global warming. Citing global warming has already having an effect on communities and public health across the nation, Obama directed infrastructure projects to take into consideration future climate conditions which naturally could result in a higher price tag for new projects or repairs to already existing structures. However, new scientific evidence has surfaced that "the solar activity is decreasing at the fastest rate as anytime in the last 10,000 years."

Environmentalist Lawrence Solomon wrote in the Financial Post, "Now an increasing number of scientists are swinging back to the thinking of the 1960s and 1970s. The global cooling hypothesis may have been right after all, they say Earth may be entering a new Little Ice Age."


Solomon adds that Columbia University's George Kukla – who warned the US government about the dangers of global cooling in 1972 – postulated that "global warming always precedes an ice age … The warming we saw in the 1980s and 1990s, in other words, was expected all along, much as the calm before the storm."

The United Nation's climate authority has tried to downplay the influence of solar activity on the Earth's climate, but climate scientists have been more assertive that the sun plays a role in affecting global temperatures.


According to Dr. Judith Curry, chair of the School of Earth and Atmospheric Sciences at Georgia Institute of Technology, the public debate is moving away from the 15-17 year pause and toward the cooling since 2002.

Professor Cliff Ollier of the School of Earth and Environmental Studies at the University of Western Australia indicates a correlation between sunspots and climate change. Prof. Ollier postulated earlier this year that the sun was the major controller of the climate.

According to Ollier, "Solar cycles provide a basis for prediction. Solar Cycle 24 has started and we can expect serious cooling. Many think that political decisions about climate are based on scientific predictions, but what politicians get are projections based on computer models." Scientists from Russia and the UK are also positing global cooling based on Solar Cycle 24. Habibullo Abdussamatov of the Russian Academy of Science expects global cooling to begin as early as 2014 with another "Little Ice Age" in 2055. Professor Mike Lockwood of Reading University predicts a "Little Ice Age" for Northern Europe because of the decline in solar activity.

Prof. Lockwood bases his postulation on the examination of certain isotopes contained in ice core samples, indicating how active the sun has been over the last thousands of years. Lockwood believes the sun is declining in activity "more rapidly than at any time in the last 10,000 years."

The last Little Ice Age occurred in the 1600s and coincided with an inactive sun, called the Maunder solar minimum. According to Don Easterbrook, professor emeritus of geology as Western Washington University, the earth has been thawing out for the last 400 years.

Easterbrook states, "So the warming we saw, which lasted only from 1978 to 1998, is something that is predictable and expectable. When the ocean changed temperatures, global cooling is almost a slam dunk. You can expect to find about 25 to 30 years yet ahead of us before it starts to warm up again. It might be even more than that."

So, scientists studying solar activity and the sun along with isotopes from ice core samples have identified a cycle correlating warming and cooling periods of the earth with the solar cycle. These correlations are based on actual observation and study, not a computer model whose predictions are based on information supplied by scientists who cannot identify all variables to enter into the equation. The computer model information then becomes faulty, inaccurate and cannot satisfy the requirements for the scientific method. Model prediction versus observational, data gathering analysis is a no win scenario for model prediction.

Since Obama has declared "global warming/climate change" a dire threat to the US – a threat that must be acted on immediately – all other scientific data opposing the big myth of global warming is ignored. It is ignored because it does not meet the political agenda.

The identification of solar cycles leading to periods of warming and cooling flies in the face of Obama's agenda to cripple the United States. If these postulations are correct, instead of destroying one sixth of America's electrical output, measures should be taken to secure electrical output. America should sustain dependable energy sources instead of chasing the pipe dream of "renewable energy." America should be working to increase its security from invasion, shore up its economy and stimulate job growth and independence of its people. This is not done by expanding federal government, but holding it to its constitutional limits with the possibility of dismantling unconstitutional agencies and declaring null and void strangling regulations based on controlling businesses and the citizenry.

By ignoring these scientific facts on solar activity and ice core samples, Obama is demonstrating hard headed, stubborn, narcissistic and dictatorial behavior. He supports a lie instead of the truth. It isn't a far stretch to see that last statement as fact. Every time he opens his mouth to speak, an entire repertoire of lies is forthcoming; Obama lives a lie. To him, a lie is truth as long as you can hide the facts, berate others who bring forth the facts, and hypnotize a population of low intellect individuals. A lie benefits an agenda to where the end justifies the means.

As I learned as a child, if you tell one lie, you have to tell another to prop it up; then, you have to keep telling lies to prop up all the previous ones. At that point, you have built a house of cards that comes tumbling down at the slightest of disturbances. Lies end up catching up to the liar as it is harder to remember what lies you have told than it is to tell the truth; truth does not change. The point eventually comes when there are no more lies to tell and the house of cards cannot stand; the lies then become the card that topples the house.


Suzanne Hamner (pen name) is a registered nurse, grandmother of 4, and a political independent residing in the state of Georgia, who is trying to mobilize the Christian community in her area to stand up and speak out against tyrannical government, invasion by totalitarian political systems masquerading as religion and get back to the basics of education.