A film from klimakaravanen (The Climate Caravan) which is intended for display in the Danish schools. This is probably the worst, most evil and flawed propaganda film I ever did see. The audio is Danish, obviously, so I was first tempted to record an English sound track, but this would be in violation of copyrights. Instead I have made a translation of the "facts" spoken in this film.

The average temperature in the world increases. It does so due to, amongst other things, our activities and consumption, which sends out more and more CO2. The UN IPCC has estimated that the global average temperature, late in this century, will increase by 2 to 4 degree Celsius, if we do not limit greenhouse gases. In a report it is even estimated we will have an increase of 6.4 degrees. We have in recent years set a heat record in Denmark, and it does not stop here. For many it might sound like a dream, but for many only a few degrees will be a nightmare.

One degree warmer: Kilimanjaro looses it's last ice and Africa will be ice free for the first time in at least 11,000 years. Also the glaciers in the Alps will melt, which can trigger deadly dangerous earth slides. Melting glaciers around the world changes the water supply for many millions of people. In Arctic the temperature increases much more than one degree. Thereby the melting of the sea ice continues, which means that species like polar bear, ring seal and walrus looses their habitat and risk extinction. It applies, by the way, to 10% of the animals on land. Most of the worlds coral reefs disappear. For example will most of the Great Barrier Reefs be dead. The production of weed in temporal zones, like in Denmark, will increase. Western USA, on the other side, will be pledged by drought, which will destroy the agriculture.

Two degrees warmer: The oceans can be the new desserts when the corals disappear, sea level rises, the acidification increases and many animals with lime shells disappear. It changes the whole ecosystem. Hundred thousands of people will die due to heat waves in Europe, the water deficiency will worsen, the southern Mediterranean countries will loose a fifth of their precipitation, the tourist industry will break down and people will flee northwards. The Greenland inland ice melts and the oceans can, in the long run, rise seven meter. In Peru all the glaciers in the Andes mountains will disappear, of which many supplies big cities with water. Global foot supplies, especially in the tropics, will be affected. A third of all current living species, can be eradicated as the climate change destroys their habitat. Up to ten million more people along coastal areas will be affected by flooding. Sixty percent more people in Africa will encounter malaria.

Three degrees warmer: The tropical rain forest in Amazons burns down in terrifying forest fires. The trees in the Amazon is not adjusted to the new dry climate. When the trees disappear, there will be dessert instead. Hurricanes will be half a category worse than the worst known today. Food and water supply comes under pressure in many places around the world. It means 100 millions or even billions migrate out of the starving and dry areas. In the southern Africa, an area the size of Botswana, will turn into sand banks. The same situation can arise in most of Australia. In Pakistan the river Indus will narrow to a small stream because the glaciers, the water comes from, will melt. In northern Europe extremely hot summers will be accompanied by extreme winter flooding, when the sea level rises. The remaining areas, that still can sustain agriculture and feed themselves, will be some of the most valuable areas on the planet. Sieged by millions of climate refugees, these areas will be hot spots for conflicts and wars. Three degrees can very well be a critical point where the development can no longer be stopped.

Four degrees warmer: The Arctic permafrost in Siberia and other places will melt and release hundred trillion tons carbon in terms of methane and CO2. All the inland ice in the Arctic ocean disappears (they really say so in the video) and leaves the North Pole in open water for the fist time in at least 3 million years. Polar bears and other ice dependent species will be totally extinct. The inland ice on the South Pole will also degrade heavily. This will gradually raise the global sea level by a further five meter and the coasts will undergo constant change. Whole areas of land and island groups disappear in the ocean. In Europe new desserts will spread in Italy Greece, Turkey and Spain. In Switzerland the summer temperature will hit 48 degrees Celsius and the Alps will stand naked without snow and ice. Europe's population can be forced to walk northwards.

Five degrees warmer: The uncertainty increases by higher temperatures, but the Earth will not look like the one we know today. Methane hydrates, that are currently tied to the sea bed, will be released in giant methane burps. There will be released massive tsunamis, that are going to further destroy the coasts. Rain forests has disappeared and in many cases converted into desserts. Other places will see way more rain and it will be possible to grow food where it was previously impossible. The temperature increases so fast, that the flow of refugees cannot keep up the pace. It is even more difficult for the animals, and over half of the planets species could be extinct. Because of the acidification of the oceans, also the ecosystem here is in danger of collapse. Sea level rise threatens cities like New York, London and Tokyo.

Six degrees warmer: 251,000,000 years ago a catastrophe hit the Earth, which killed 95% of all life. It is possibly the closest Earth has ever been to being a lifeless rock in space. The catastrophe took place in connection with a giant greenhouse effect event, where the average temperature possibly rose with 6 degrees Celsius. Methane hydrates was released in enormous quantities, totaling an energy similar to all the world's nuclear arsenal exploding in one go.

It is not for 100% sure that things will develop in the way described, but it is also not too late to act. There are incredible many factors involved, when you are forecasting the future climate. On the other hand, we are not talking about pure guesswork. We are involved in choosing our own future. Read more about what you can do on www.klimakaravanen.dk. 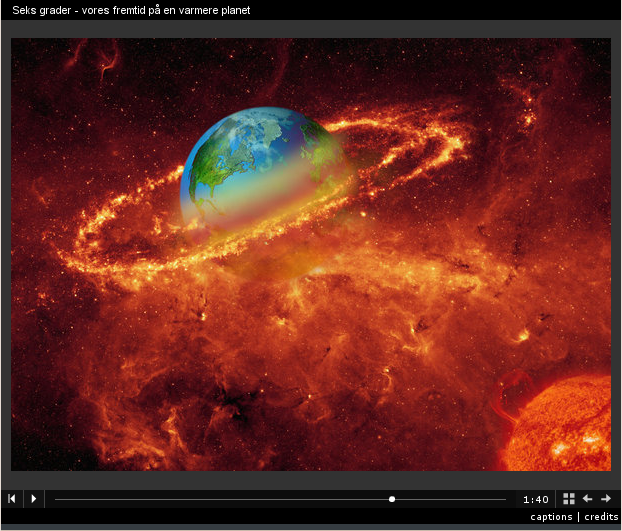